The Association of European Election Officials (ACEEEO) that was established 1991 in Budapest held its 20th jubilee conference on 16-18 June 2011 in Budapest.

Professional topic of the jubilee conference was the "Independence of the Electoral Management Bodies" that was disputed in many aspects by electoral professionals coming from more than 40 countries. Dr. Istvan Stumpf, Constitutional Judge in Hungary, György Szoboszlai, Member of the Political Science Committee of the Hungarian Academy of Sciences, William Hybl, Chairman of the United States Advisory Commission on Public Diplomacy, William Sweeney, President of International Foundations for Electoral Systems (IFES), Janez Lenarcic, Ambassador, Director of ODIHR and representative of Venice Commission contributed in the important international discussion.

Participants of the conference (more than 160 electoral professionals, among them leaders of national electoral committees, professionals of international organizations and scientists) had reaffirm their commitment to free, impartial and fair elections in a declaration. They also ascertained that the electoral management bodies had to face with lots of challenges during the past 20 years, and these challenges targeted their independence and impartiality nevertheless they could overcome them. Application of international professional standards, appropriate and regular trainings of staff as well as the good relationship with the media, with citizens and other election stakeholders also play a key role in securing the independence of electoral management bodies.

For further information and interview appointment, please contact the ACEEEO Secretariat at aceeeo@aceeeo.org . 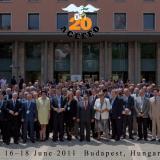