In 2018 Lithuania took over the Presidency of the Association and hosts the 27th Annual Conference. With the active participation of 150 electoral experts this year we intend to discuss the topic of ‘Guaranteeing Voter Privacy, Security and Integrity’. In the frame of the theoretical aspects we will focus on questions of the access to the public information; the freedom of expression; the free electoral campaign. During the conference we would like to focus on the protection of voter information and all digital data used in elections; on the securing technology of the voting process from a cyber-security perspective; and on the communication of trust towards voters, independence of elections, the importance to prevent fraud and other topics related to integrity.

Recording from the 27th Annual Conference:

The Central Electoral Commission is a permanent supreme State institution for organising and conducting elections and referendums, provided for by the Constitution of the Republic of Lithuania. Moreover, the Central Electoral Commission is the competent national authority that certifies statements of support and on-line system of collection of European Citizens’ Initiatives.

Upon the recommendation of its Speaker, Parliament appoints the Chairman of the Central Electoral Commission.

The Parliament sets up the Central Electoral Commission no later than 200 days and no earlier than 140 days after regular or early elections to the Parliament.

The Association of European Election Officials, formerly the Association of Central and Eastern Election Officials, was established in 1991. It is a non-governmental organization, an alliance that is independent from political parties. The Association’s main objective is to provide assistance for holding free and fair elections. In order to achieve this mission, the Association supports the operation of permanent election commissions and offices and actively contributes to the establishment of legal standards regarding the requirements for democratic elections. The ACEEEO organizes different meeting points for election professionals – conferences and seminars – and provides professional assistance and guidance for those who require it. By 2017 the ACEEEO counts 25 member-countries and several member-NGOs and keeps good partnership relations with the different international organizations in the field of elections.

In recent times, the European voters’ trust in local, general, presidential and parliamentary elections has waxed and waned significantly and has been tested like never before in all countries of the European continent. Due to global political shifts and changes unfamiliar and not yet witnessed forces both from external origins and from within European borders, are in pursuit of a daring attempt to disrupt the countries’ functioning electoral processes and to profoundly undermine the legitimacy of elections, operating with brand new technologies and mechanisms.

Having identified these deep-rooted changes and profound challenges for the European circle of democratic elections, the highly-esteemed electoral management bodies of the continent must act with diligence and extreme foresight to possess the ability to successfully understand the obstacles stumbled upon by European nations, and to react to the major hardships victoriously.

The 27th annual conference and general assembly meeting of the Association of European Election Officials (ACEEEO) is going to focus on emphasizing the immense importance of dealing with these topics in a practical fashion, wishing to broaden the already-considerable knowledge of the Electoral Management Bodies of ACEEEO by striving to assist them in their mission to successfully guarantee the long-lasting trust of voters for European elections.

Corresponding to the relevant needs of today’s Europe, and to successfully shape the meeting’s major focuses and topics, this year’s annual conference and general assembly is going to be centered on three crucial keywords – privacy, security and integrity.

As campaigners of the fulfillment of European democracies, we strive to achieve ultimate political privacy with the safeguard of anonymity and the personal privacy of all participants of the meeting, creating a safe environment for the freedom of thought in the form of a secret ballot. Furthermore, the protection of personal information of the highly-esteemed voters is of utmost importance, thus the annual conference and general assembly conjointly focuses on data protection, both digital data and reproduced documents operated with during the elections. Beyond general data protection regulation (GDPR), a high emphasis is put on database and website protection, as well as on the control of safe data transmissions and on creating a credible report of the output of the election night as well.

One of the annual conference’s principal topics is going to be the security of elections, approached primarily from the viewpoint of cyber security, as the satisfactory protection of the voting infrastructure, the election office networks and the voter registration database is the indispensable prerequisite of maintaining the general security of elections. Furthermore, beyond confirming the vital protection of the infrastructure and methodology, possible risks and threats, both foreshadowed and unforeseen, are going to be under discussed and evaluated during the sessions of the meeting with special regard to the practical protection requirements such as calling upon the assistance of qualified personnel and executing the emergency plan according to the rule of procedure.

The meeting, alongside the issues mentioned above, extensively deals with the integrity of European elections. The meeting’s aim is going to be to facilitate and to promote the conduction of elections in compliance with global and international standards, endorsed in a series of treaties and guidelines, accepted by the members of the international and the European community. The goal of the annual conference’s long-lasting impact is to remarkably reduce the number of electoral malpractices and the level of corruption and vote manipulation. Moreover, discussing and spreading functioning international norms and standards, such as universal and equal suffrage or the conduction of genuine elections will also facilitate further development of elections.

The participants of the 27th Annual Conference of the Association of European Election Officials (also known as ACEEEO) emphasize the importance of preserving and promoting the security, privacy and integrity of elections.

Elections are the starting points of the democratic process, and any failure of this institution can pose a threat to the whole democratic system. It is therefore of utmost importance to fulfil the democratic standards with regard to security, privacy and integrity of elections.

The participants of the Conference recognize that the digital age changed the environment of the elections to a great extent. Digital platforms have become part of everyday-life, which exposes security, privacy and integrity to new challenges. The new platforms brought in new stakeholders as well to the electoral arena. Cooperation between EMB’s and these new stakeholders is inevitable in order to effectively guard the elections.

Based on these deliberations the recommendations of 27th Annual Conference of ACEEEO are the following:

Viktoras Pranckietis, Speaker of the Parliament of the Lithuania

Seen and Unseen threats to elections

Best practices from the world of elections – Communicating trust

11th March – The Day of the Restoration of Independence of Lithuania

6th July – Day of the State (Coronation of King Mindaugas)

Location: a country in the Baltic region of northern-eastern Europe

Climate: ranges between maritime and continental

Vilnius is the capital of the Republic of Lithuania, located in the southeast part of Lithuania and with the 543,626 inhabitants is the second largest city in the Baltic states region. The Old Town of Vilnius is the largest old town in the Eastern Europe, covering 359,5 ha.

Vilnius was first mentioned in 1323 in the letters of Gediminas – the Grand Duke of Lithuania – inviting craftsmen, merchants and monks from the Western Europe to come and stay here.  In 1387, after Lithuania adopted Christianity, the city was awarded the Magdeburg Rights. Vilnius was formed as a center of tolerance where people of various nationalities, including Poles, Belarussians, Russians, Germans and others, settled and lived in harmony.

After the Union of Lublin (1569) that created the Polish–Lithuanian Commonwealth, the city flourished further in part due to the establishment of Vilnius University by Stephen Bathory, King of Poland and Grand Duke of Lithuania in 1579. The university soon developed into one of the most important scientific and cultural centers of the region and the most notable scientific center of the Grand Duchy of Lithuania.

After the Third Partition of Polish-Lithuanian Commonwealth in 1795, Vilnius was annexed by the Russian Empire and became the capital of Vilna Governorate, a part of the Northwestern Krai.

At the beginning of the 20th century, Vilnius became the center of the Lithuanian national rebirth. During the First World War, Vilnius was occupied by Germany from 1915 until 1918. Still under German occupation, Council of Lithuania proclaimed the Act of Independence of Lithuania in Vilnius on February 16th, 1918. Act proclaimed restoration of the independent state of Lithuania with Vilnius as its capital.

During the Inter-War period and the Second World War Vilnius has been occupied several times by Poland, Nazi Germany and Soviet forces. Kaunas became Temporary Capital of Lithuania in 1920, when Poland annexed Vilnius.

In 1944 the Germans were forced to leave Vilnius. By July 1944, the area around Vilnius came under control of the Polish Resistance fighters of the Armia Krajowa. The Soviet Union re-occupied Lithuania and Joseph Stalin established the Lithuanian Soviet Socialist Republic in 1944 with its capital in Vilnius.

On March 11th, 1990, the Supreme Council of the Lithuanian SSR announced its independence from the Soviet Union and restored the independent Republic of Lithuania.

The Historic Center of Vilnius has been inscribed on the World Heritage List (UNESCO) in 1994. The most valuable historic and cultural sites are concentrated here. The buildings in the old town – there are nearly 1,500 – were being built for several centuries, creating a blend of many different architectural styles. The Historic Center has also maintained a radial street pattern that dates back to the Middle Ages. Its spatial structure reflects both the evolution from changes in style and the political and natural calamities that have struck the area.

Some spaces, uses and activities have naturally changed with developing social and economic needs, yet the formulated significance of the property remains readily recognizable. Vilnius has retained its political role and economic and cultural importance in the country and the region, and its current shape represents its complex history excellently.

The current shape of the city retains its authentic qualities in the material attributes and continuous processes, traditions of the arts and life witnessing the often-stormy history of the city and country and their political, economic and cultural evolution throughout the centuries.

Contemporary Vilnius is a center of the business, politics and culture in Lithuania.  The city enjoys a well-developed infrastructure of services and entertainments.

The Association of European Election Officials gratefully acknowledges the generous support of the following organizations in 2018: 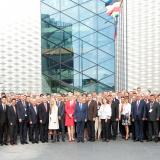 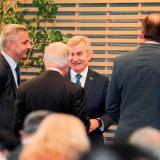 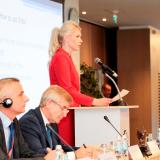 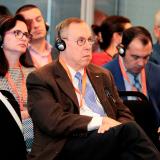 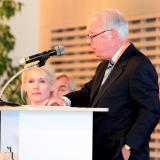 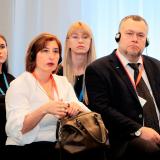 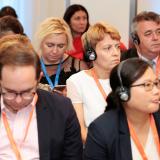 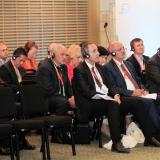 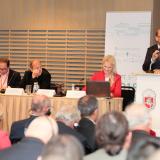 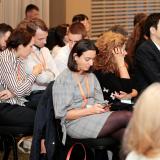 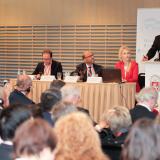 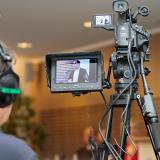 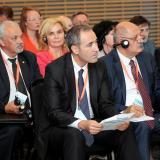 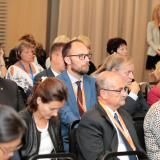 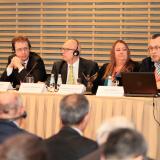 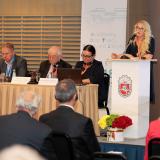 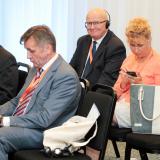 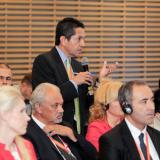 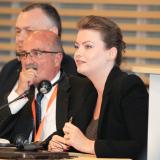 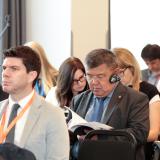 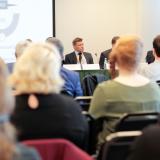 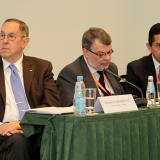 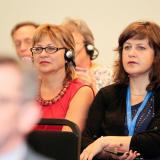 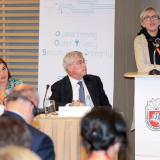 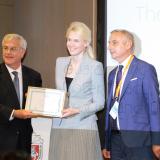 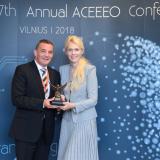