1. Fourth Online Symposium on Elections in Times of Epidemic 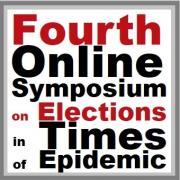 Continuing the successful series of Online Symposiums on Elections in Times of Epidemic the ACEEEO organizes the Fourth Symposium on 10 November 2020, 15.00-17.00 (CEST).

The spread of COVID-19 virus and the preventive measures of the responsible healthcare institutions are still making impossible most of the physical gatherings of international electoral experts. Nevertheless, a constant exchange of experiences is vital for the electoral officials who continue to work on safe and meaningful elections. Therefore, the ACEEEO in line with its mission continues to provide a platform for electoral practitioners to discuss and learn about the recent developments and best practices in the field of Elections in Times of Epidemic.

Thus, the ACEEEO invites all the interested to attend the Fourth Symposium on 10 November 2020, which will deal with the topic from a general angle on the one side, and from a country specific perspective from the other side, tackling the experiences from elections held in Georgia, Kyrgyzstan, Lithuania, Republic of Moldova, Ukraine and the U.S.

Representatives of the EMBs of Georgia, Kyrgyzstan, Lithuania, Republic of Moldova and Ukraine

29th Annual Conference of the ACEEEO 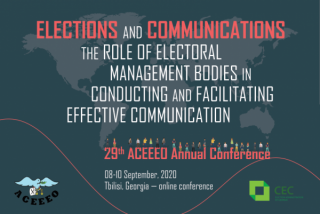 The Association of European Election Officials (ACEEEO) and the Central Election Commission (CEC) of Georgia cooranized the 29th Annual Conference of the ACEEEO on 9-10 September 2020, online in Tbilisi, Georgia. With the active participation of electoral officials, academia and other electoral stakeholders, this year we discussed the topic of ‘Elections and Communications - The role of Electoral Management Bodies in conducting and facilitating effective communication’.

The conference was opened by Zsolt Szolnoki (Secretary General, ACEEEO) and Tamar Zhvania (President of ACEEEO, Chairperson of the Central Election Commission of Georgia). The opening was followed by Ms. Zhvania’s presentation that gave an overarching view of the whole conference theme, of the role of EMBs in conducting and facilitating effective communications. Besides providing a useful mindmap of the topic, the presentation described the different ways CEC Georgia conducted communications, providing useful best-practices for the audience.

Trust is inevitable when it comes to elections, and, accordingly, Roundtable I. dealt with the topic of external communications towards voters with the moderation of Arnis Cimdars (President of the Latvian Election Expert Association, Honorary Member of ACEEEO). The first speaker, Hassan K. Sesay (Senior Electoral/Political Affairs Officer, Electoral Assistance Division, Department of Political and Peacebuilding Affairs, United Nations) examined the question from a policy perspective, giving insight as to how EMBs can promote trust in elections. The speaker presented UN’s work in electoral assistance, underlining that technical assistance is by far the main form of assistance, and presenting the main core principles of the electoral assistance work of UN. He was followed by Corneliu Pasat (Deputy Head of Communication, Public Relations and Media Department, Central Election Commission of the Republic of Moldova), who gave a thought-provoking presentation on youth participation in Moldova. Mr. Pasat presented the different way CEC Moldova communicates with the youth, and how effective this communication may be if applied sufficiently.

Roundtable II. was moderated by Laura Matjošaitytė (Chairperson of the Central Electoral Commission of Lithuania) and tackled the question of the role of media in electoral communications. The first speaker, Gábor Polyák (Professor at the University of Pécs) gave a detailed description on how the Hungarian government exerts impact on the media through different means. He was followed by Ingrid Bicu, who approached the question from a gender-sensitive angle, and presented on the gender based disinformation in elections, showing how different roles women play in political and electoral life and the grave challenges they face. The speaker emphasized that disinformation should be examined with special regard to gender-based disinformation. The third speaker was Fosco Riani (Public Policy Associate Manager for elections in Europe, Middle East and Africa, Facebook - Gold Sponsor of the Conference) who presented on the various ways protection of integrity of election is carried out on the social network. Mr. Riani informed the audience on the most important objectives of Facebook and the efforts made to achieve them.

The second day of the conference started with Rouldtable III. with the title ‘Spreading information within the EMB system – Communication with other State Bodies and Stakeholders’, which was moderated by Zsombor Vajda (Vice-President, Permanent Electoral Authority of Romania). The first speaker, Paul DeGregorio (Honorary Member, ACEEEO) first honored István Zsuffa, who has recently passed away, and was of great service to ACEEEO in particular and elections in general. Mr. Gregorio presentation gave an overview of the current situation in the U.S., emphasizing the challenges posed by the COVID-19 pandemic, and how election officials may overcome these difficulties. He also embarked on the different ways EMBs may communicate with other state bodies and stakeholders, giving some illuminating examples of best practices. He was followed by Pierre Garrone (Head of Elections and Political Parties Division, the Venice Commission of Council of Europe), who gave a description on how the Council of Europe is involved in the field of digital technologies and elections. Afterwards, he gave an introduction on the related report that was jointly adopted by the Venice Commission and the Council of Democratic Elections in 2019. Last, but not least, Nermin Nisic (Senior Electoral Expert, IFES) presented on lessons learned and best practices regarding internal and external communications. Mr. Nisic informed the audience on the campaign tools that were applied to spread information to poll-station workers as well voters, via traditional means and social networks.

Roundtable IV. tackled the question of disinformation, and the moderation was provided by the Delian Project. The first speaker, Erik Brattberg (Europe Program Director, Carnegie Endowment for International Peace) gave an overview on the threat of disinformation based on the research of Carnegie Endownment, and on the framework that was elaborated by the organization. This included a typology of interferences, on electoral dimension and potential targets. He was followed by Manuel Carrillo Poblano (Head of the International Affairs Unit, Nacional Electoral Institute – INE - of Mexico) gave insights regarding the trends and impact of digital communication on elections and on electoral integrity. The speaker covered both the positive and negative impact on the flow of information in the electoral process. The last presentation of the panel was given by Thomas Hicks (Commissioner, U.S. Elections Assistance Commission), who informed the audience on the activities of the Assistance Commission, on the U.S. election administration system and an overview on the 2016 elections and the COVID-19 situation.

The roundtable was followed by the section Lessons learned from the Elections held During the Pandemic, moderated by Richard Soudriette (Honorary Member of ACEEEO). The first speaker, Damir Kontrec (Vice-President, State Electoral Commission of the Republic of Croatia) presented on the impact of COVID-19 on the timing of elections and on the applicable legal background. The speaker gave a detailed overview of the electoral process, namely, the cooperation of the different state bodies. The next speaker was Laura Matjošaitytė (Chairperson of the Central Electoral Commission of Lithuania) who presented on the preparations of the upcoming parliamentary elections that are held in October 2020. The third speaker Enver Saljihi (Memeber of State Election Commission of North Macedonia) presented in a unique fashion, via short film. The film involved information on the special measures adopted to organize the early elections taking place in North-Macedonia. The last presentation was delivered by Krzysztof Lorentz (Head of the Department, National Electoral Office of Poland), who spoke not just about the elections held in the ordinary way during the pandemic, but about the election held – uniquely in the world – with closed voting booths.

We are grateful to our speakers for the valuable contributions. For the presentations and video footage please visit our website at the following link: https://aceeeo.org/en/events/29th-annual-conference-8-10-september-2020-tbilisi-georgia-online

The Association of European Election Officials gratefully acknowledges the generous support of the Facebook in 2020: