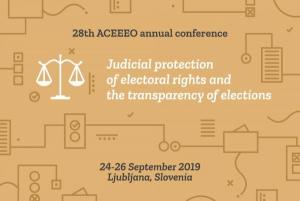 This year the ACEEEO Annual Conference was hosted by the Central Election Commission of Slovenia and took place in the heart of the beautiful Ljubljana on the 24-26 September. With the participation of more than 120 election experts from all around the world, the topics of ‘judicial protection of electoral rights’ on the one hand, and ‘transparency of elections’ on the other have been discussed thoroughly. Participants were from more than 30 countries, representing the most important international organisations in the electoral field as well as electoral management bodies from Europe and Asia. This melting-pot of diverse views, approaches and experiences enabled the participants to better understand these election-related issues. With the help of the speakers, the topics of both practical and theoretical aspects of judicial protection and transparency were presented. Moreover, representatives of electoral management bodies from the EU shared their experiences on the 2019 EP elections. 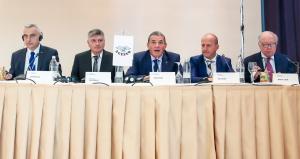 Jadranka Sovdat’s (Former President of the Constitutional Court of the Republic of Slovenia) speech was delivered by Saša Zagorc (Professor, Ljubljana University) and it embarked upon the implementation of international standards in Slovenia. The next speaker, dr. Bruna Žuber (Assistant, Department of Administrative Law at the Faculty of Law in Ljubljana) who spoke about legitimacy of elections and its relationship of the legal background. She was followed by Gaël Martin-Micallef (Legal Adviser at the Division of Elections and Political Parties, Venice Commission), who presented on the findings of the Venice Commission in its comparative studies regarding EDR. Finally, János Mécs (Project Manager, ACEEEO Secretariat) presented on the preliminary results on the ACEEEO EMB survey on EDR.

The second Plenary Session, which also chaired by Peter Golob, tackled the practical perspectives of judicial protection of electoral rights. 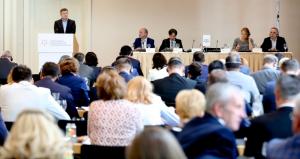 The first presenter was dr. Erik Kerševan (Supreme Court Judge, Supreme Court of the Republic of Slovenia), whose presentation revolved around the tensions between the fairness and fastness of electoral procedures. He was followed by Andrej Kmecl, (Judge, Administrative Court Republic of Slovenia), who embarked upon the experiences of the Slovenian judiciary in electoral matters, giving a valuable perspective on how judges approach these questions. He was followed by Ingrid Bicu (National Expert at International IDEA) who presented on democracy and electoral justice, and IDEA’s contribution to is. Finally, Giorgi Sharabidze (Deputy Chairperson, Central Election Commission of Georgia) gave his contribution on the experiences of CEC Georgiain EDR and its relations to the courts.

During the last session on the first day ,(which is chaired by Nina Brumen (Member, State Election Commission of the Republic of Slovenia) the dialogue between EMBs and courts were discussed. The first speaker, Mayya Grishina (Secretary, Central Election Commission of the Russian Federation) presented on the Russian experiences with courts. Ana Rusu (Senior Election Adviser, OSCE /ODIHR) focused on issues related to the judicial protection of rights identified in OSCE/ODIHR election observation missions.

The second conference day revolved around the topic of transparency. The first  Session chaired by dr. Janez Pogorelec (Member, State Election Commission of the Republic of Slovenia) put transparency into context with their contributions. 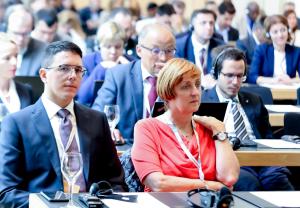 The operations of the United Nations were presented by Simon-Pierre Nanitelamio (Deputy Director, United Nations Electoral Assistance Division), showing the perspectives and goals of the UN as well as their implementation. This was followed by Vid Tomič’ (Transparency International Slovenia) contribution that described the main features of the Slovenian local electoral system and the most pressing issues in the field, such as mayors’ abuse of power, or problems of media coverage. Last but not least Anika Geisel (Public Policy Lead for elections in Europe, Facebook - Silver Sponsor of the Conference) presented on Facebooks’ policies regarding the protection of integrity of the EP elections by for example fighting fake-accounts, false news and pursuing transparency.

The last Plenary Session that was chaired by ACEEEO honorary member Paul DeGregorio dealt with the topic of the practical perspectives of transparency. The first presenter was Dr. Annette M. Fath-Lihic (EUSR Chief Political Adviser/Executive Coordinator, European Union Office in Kosovo/EU Special Representative) who, in her presentation showed the key challenges and opportunities to the future of election observation missions. She was followed by Nazarali Aripov (member of the Central Commission for Elections and Referenda of the Kyrgyz Republic), who spoke about the good practices, challenges and opportunities in the Kyrgyz experience. Finally, Beata Martin-Rozumiłowicz (Regional Director, IFES) presented the regional election justice networks, showing among others the emerging trends in this field. 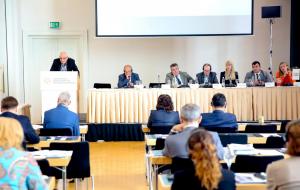 As the result of this fruitful discussion, participants adopted the Ljubljana Declaration on Judicial Protection of Electoral Rights and Transparency of Elections that is now available on our webpage, as well as presentations, video footage and pictures.

The recommendations of the conference together with the agenda, speakers’ biographies and presentations, and the video taken at the event are available on our website (www.aceeeo.org/en/events/28th-annual-conference-24-26-september-2019-ljubljana-slovenia). Also, please visit the photo gallery at the https://www.dropbox.com/sh/b1mp6t15fd0ij3l/AACtfRIppmcYh5LO4WV4T8r_a?dl=0.

General Assembly and Executive Board Meeting 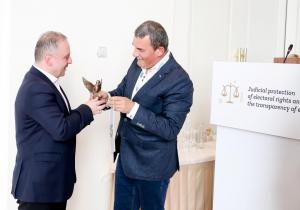 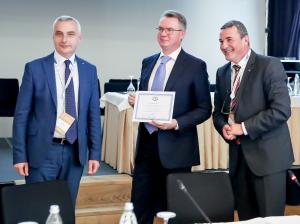 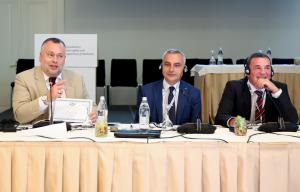 The General Assembly elected the new Executive Board for the next 3 years. For the seven places there were eight nominees, and as the result of the voting the new EB has the following members: Bulgaria, Croatia, Kyrgyzstan, Latvia, Lithuania, Moldova and Romania.