Third Online Symposium on ‘Elections in Times of Epidemic’ 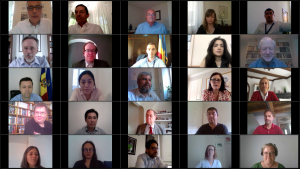 symposiums on elections in times of epidemic ended with the third and closing event held 2 July 2020. The circa 80 attendees from more than 35 countries representing International Organizations, Electoral Management Bodies (EMBs), Non-Governmental Organizations and Universities from across the globe have had the chance to get acquainted with the challenges and solutions of holding elections under the threat of COVID-19 pandemic. The last Symposium focused on the first round of Polish presidential elections as well as on the topic of communications in times of epidemic. This time, to broaden our perspective, the Latin-American experience was also discussed.

The Symposium was opened by Zsolt Szolnoki (Secretary General, ACEEEO), who greeted the audience, gave a short summary on the previous two symposiums, described the agenda, and introduced the speakers. Mr. Szolnoki noted that as the situation may last longer than previously expected, a continuous discussion is needed. The Symposium continued with follow up on the Polish elections taking place 28 June. The first speaker, Krzysztof Lorentz (Head of the Department, National Electoral Office of Poland) continued where the last symposium ended and gave a detailed timeline of the process from 5 June running up till the e-day, 28 June. According to Mr. Lorentz both the candidates and the election officials could keep the very tight deadlines successfully, even though some changes in the candidates took place due to a resignation and a legal remedy. The election was partly postal, on an on-demand basis, with around 537.000 registered postal voters and 484.000 delivered postal votes, however, the exact number of valid votes cast would be known only some weeks after the election. On the E-Day standard health security measures were implemented, namely, masks for voters and EMB members, liming the number of voters being present at the same time at polling stations, etc. Official results have been announced on Tuesday, 30 July, showing high turnout (64.51 percent) and that no candidate secured more than 50 percent of the votes. Mr. Lorentz summarized that besides some short-term problems some long-term problems were discernible, such as instability of electoral law, lack of consensus during the legislative work and the strong presence of political calculations, all of which contribute to the weakening of confidence in elections. However, both the organization of the elections and the communication on behalf of EMBs went smoothly. At the end of the presentation Mr. Lorentz answered some questions on short deadlines, postal voting and the budgetary consequences.

Mr. Lorentz was followed by 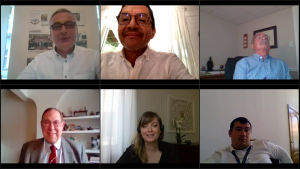 Ingrid Bicu (National Expert, International IDEA), who presented on the communications in times of epidemic that is also the center theme of the Annual ACEEEO Conference that is to be held in September 2020. The central question of Ms. Bicu’s presentation was how to communicate uncertainty, namely, on crisis communications that affected all EMBs in the world. The speaker gave some statistical data on the number of postponed, held, and held after postponed elections, showing that typically the first reaction was postponement, while now many states are rescheduling elections to 2020 and 2021. Ms. Bicu emphasized that scenario analysis should be part of the decision-making process that includes the possible risks entailed by the different decisions on whether to hold or postpone elections. The speaker gave an overview of the possible threats and obstacles in terms of communications; citizens have to distinguish between a wide variety of information, moreover, false information is widely disseminated, and EMBs and other state authorities found themselves in such circumstances while facing the deficit of trust. Ms. Bicu also described the ideal effective communication that includes trust building; positioning EMBs as the sole source of information; citizen education; addressing rumors and misinformation; facilitating bidirectional communications. Finally, the speaker identified some key questions EMBs should ask themselves to assess whether they are truly prepared for a crisis communication. After the presentation questions on the role of politicians and the respective role of EMBs in conducting communications, on how the communication may be made more inclusive, and how the public may gain trust in a short period of time especially with regard to new voting arrangements.

The third speaker, Manuel Carrillo Poblano (Head of the International Affairs Unit, National Electoral Institute of Mexico, INE) presented on the Latin-American experience. The speaker emphasized the challenging situation democracies are in and the radical changes we are witnessing in a very complex environment. He first described the context that involved protests against economic inequality (Ecuador, Chile, Venezuela) anti-governmental protests (Chile, Ecuador, Venezuela, Nicaragua), protests for lack of electoral integrity (Bolivia, Dominican Republic) and protests against repression by public forces, insecurity (Mexico, Chile, Ecuador). Mr. Carrillo noted that the context facing Latin America, prior to the health crisis, already saw challenges for electoral bodies, such as undermined independence of EMBs, decreasing public trust, disenchantment with democracy. The speaker then noted the effects of the pandemic that included suspension and postponement of elections, citing statistical data, and emphasizing that elections from Dominican Republic, Bolivia and Chile are the most relevant in this context. In many jurisdictions political rights have been restricted, executive power was concentrated, however, the speaker noted that it is a time when human rights should be especially respected. The speaker summarized the five key challenges in the context of pandemic – organizing elections, guaranteeing health, high participation, and inclusivity. As a final remark Mr. Carrillo underlined the importance and the role of means of communications, the relationship and conflict between political rights and health related rights.

The symposium was closed by a vivid exchange of ideas and thoughts related to the topic. Zsolt Szolnoki closed the meeting by inviting the participant for a group photo.