The 17th ACEEEO annual conference was held and hosted by our Romanian colleagues, in Constanta (Romania) from 11 to 13 September 2008.

Our Association brings together on an annual basis experts and heads of the election management bodies from all over Europe to discuss how to strengthen good governance through the conduct of democratic elections. In 2008, leading democracy and election experts from all over the world, including old EU members and from newly joined EU countries exchanged experience, lessons learned and shared ideas on electoral democracy. Hosting the international conference in Constanza, our Romanian colleagues had an excellent opportunity not only to provide background for holding professional discussions but also to demonstrate the cultural, socio-economical and political context of their activities.

In 2008 we put on the agenda exchange of experiences on and the international comparison of issues related to Role of the law enforcement bodies in the security of the elections, Ensuring security and accuracy of voting materials. The conference featured also professional development workshops, panels of election experts discussing issues of elections in the ACEEEO region and elections to the European Parliament in 2009.

The conference was supported by the Education, Audiovisual and Culture Executive Agency of the European Commission.

We hope that participants of the conference had productive debates and returned home with unforgettable memories. We are looking forward to welcome election stakeholders again at our 18th Annual Conference to be held in September, 2009 in Yerevan, Armenia. 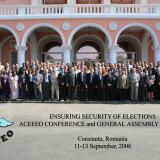